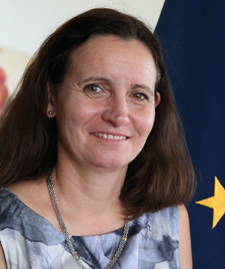 Before becoming Managing Director for the Americas at the EEAS, Ms. Hrdá was appointed Ambassador of the Czech Republic to the United Nations in 2011; a position she held for 5 years. Her professional career includes important positions; she was President of the Executive Board of UNDP, UNFPA, UNOPS in 2011 and Chair of the Committee for the United Nations Population Award in 2013, 2014 and 2015.

As Ambassador of the Czech Republic to 11 Caribbean countries, since June 2011, she is responsible for bilateral relations between the respective countries and OECS.

Between 2006 and 2010, Ms. Hrdá worked as General Director for the Section of the Minister - Chief of Staff  and Chief of Cabinet, with her main responsibilities covering the management of the Policy Planning Department, Diplomatic Academy and  the Institute of International Relations in Prague, the management of the Press Department and Spokesperson of the Ministry, Department of Public Information, Library and Archive of the Czernin Palace, Cabinet of the Minister, Diplomatic Protocol Department,  Inspection General and Audit, overseeing Public Diplomacy Department, dealing with national and international audiences, devising public communication strategies, cultural programming, academic grants, educational exchanges, international visitor programs and being in charge of human resources and personnel assignments for the Ministry.

Her career includes having been Director of the American Department between 2004 and 2005 and Director of Multilateral Economical Affairs in 2004.

She was Ambassador of the Czech Republic to Argentina and Paraguay between 1999 and 2003.

She was Director of the Latin American Department from 1994 to 1996 and Counsellor to the First Deputy Minister in 1993, as well as a Desk Officer in Germany, Austria and Switzerland in 1992.

Earlier in her career she worked at the Institute of Advance Management, Prague, Czech Republic (1990 -1992). Ms. Hrdá is a professional translator and interpreter as well as a University and High School Lecturer. Since 1995, she has been teaching Latin American history and policy development, Diplomatic Protocol and Public Relations.

Besides Czech, her mother tongue, she masters German, English, Spanish, Russian and French.

She has been honoured with the following awards:

Ms Hrdá is married to Mr. Jozef Šepetka and has a daughter, Debora.