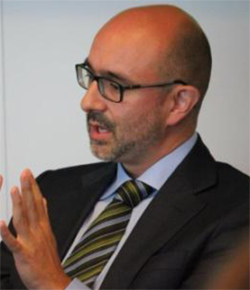 He served as Head of the Iran Task Force from 2015 to September 2017. He occupied before the position of Principal Adviser in the Americas Department where he was responsible for the EU-CELAC Summit in 2015.

From 2009 to 2014 he served in the Cabinet of the President of the European Commission as Diplomatic Adviser and then Deputy Head of Cabinet. In this position he prepared and participated in major international Summits with the EU's strategic partners (US, China, Russia, India, Brazil, Japan, South Korea, Canada, Mexico and South Africa) as well G8 and G20 meetings.

He joined the Portuguese diplomatic service in 1999 having served in different positions in the Middle East and Political Affairs Departments. From 2002 to 2004 he was adviser to the Portuguese Minister for Foreign Affairs. He was posted in the Portuguese Permanent Representation to the European Union, where he was responsible for the coordination of internal EU policies during the Portuguese Presidency of the Council in 2007.

Hugo Sobral graduated in International Relations from Universidade do Minho - Portugal. He worked as Researcher in the Institute for Strategic and International Studies in Lisbon.