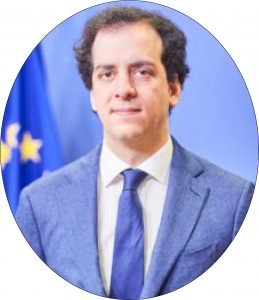 Alejandro Cainzos is member of cabinet to European Commission Executive Vice-President Margrethe Vestager, whom he advises on the international aspects of her portfolio, 5G, cybersecurity and defence. He has previously advised the Commission’s Deputy and Acting Secretary-General and held other posts in the Secretariat-General and the Directorate-General for Internal Market and Services. Prior to joining the Commission he worked on public affairs in the financial sector. He holds a MA from the College of Europe and a BS from Georgetown University on international relations and economics.