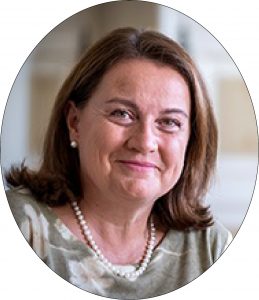 Secretary of State for European Affairs

Ana Paula Zacarias was born in Lisbon in 1959.

She has a degree in Cultural Anthropology from the University of Lisbon (1983).

She was an assistant at the Faculdade de Ciências Sociais e Humanas - Universidade Nova de Lisboa until 1985.

She entered the Portuguese Diplomatic Service in 1983 and held several assignments: to the Protocol Department of the Ministry of Foreign Affairs (1984-1985); as Junior Counsellor for International Relations at the Office of the President of the Republic (1986-1988); as Director of Press and Information Department (1996-1998) and as Vice President of the Instituto Camões (1998-2000).

On July 2017, she was appointed as Secretary of State for European Affairs, and is currently serving in this position since October 2019.