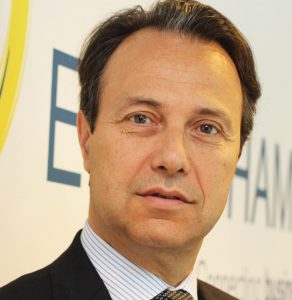 Arnaldo Abruzzini is the Chief Executive Officer, CEO of EUROCHAMBRES, the Association of European Chambers of Commerce and Industry since 1999. He is a senior lobbyist in Brussels and represents the voice of over 20 million companies through members in 43 countries and a network of 1.700 regional and local Chambers.

Mr Abruzzini has worked as Managing Director of several companies active in the Telecommunication (EPTA), marketing and communication (MediaCamere) and business advices (CoFiCom) in Italy and US.

He has also been served in the financial sector, actively working in Investment Banking (MedioBanca) and Insurance companies (Bavaria).

He has started his carrier as auditor in Milwaukee, Wisconsin, in 1979 (Arthur Andersen)

Born in Rome (Italy) on 5 August 1957, he is a graduate in Economy with major in Finance from the University of Rome. He’s fluent in English, French and Spanish other than his mother tongue.

Is the Brussels-based Association of European Chambers of Commerce and Industry. EUROCHAMBRES represents over 20 million businesses in Europe through 45 members (43 national associations of chambers of commerce and industry and two transnational chamber organisations) and a network of 1700 regional and local Chambers. More than 98% of these businesses are Small and Medium Enterprises (SMEs). EUROCHAMBRES is the sole European body that serves the general interests of European business – due to the multi-sectoral membership of chambers – and the only one so close to business, as a result of the Chambers’ regional focus.